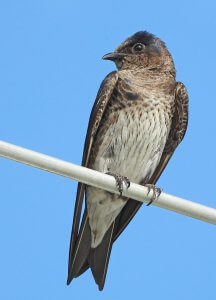 The BBC is pleased to announce its donation of $250 to support the Purple Martin Legacy Project at the Parker River National Wildlife Refuge. The Friends of the Parker River NWR initiated this worthy project to expand the Purple Martin colonies on the refuge. Decades ago, there were up to a dozen martin colonies down the length of the island. Over the years the colonies dwindled as the wooden bird houses succumbed to time and weather. Through the efforts of BBC member Sue McGrath, who replaced the old, decaying structures with a new system of gourd houses, there are now two martin colonies thriving on the refuge, and another colony located at the north end of the island at the site of the former refuge headquarters. This new project, spearheaded by BBC member Doug Chickering, will start by adding one colony, at a site to be determined, with a goal of restoring the legacy of past years when Purple Martins were a presence the length of the refuge. The Friends plan to recruit volunteers, via their website, to aid in maintaining and documenting the progress of any new colony.

If you wish to support this project individually, you can send a check to Friends of the Parker River NWR, with Purple Martin in the memo line. Mail the check to:

The Friends, and the Purple Martins, will appreciate any donation, large or small.